The sex of the marijuana plants can be identified during the pre-floral stage of weed growth but it takes experience and expertise to be able to do that. Pre-flowering may appear while growing marijuana is still on the vegetative stage. The process of sexing is important for pot enthusiasts who are into growing cannabis. During marijuana sexing, you can identify the males and remove them from the garden. If you want seed production, retain some of the male cannabis. If you want to get the best out from your plants, whether producing seeds or getting the bombastic buds, then we can only be recommended the Growing Elite Marijuana eBook.

Unless you are cultivating feminized seeds, cannabis can grow either as male or females. Growing weed in the best environment is essential because poor growing conditions may result in the development of hermaphrodites (female cannabis with male characteristics).

Sorting Out Male Cannabis and Female in Pot Growing

Male and female plants can be identified during the pre-flowering stage by examining the nodes that connect the branch stems and the leaves to the marijuana plant’s main stem. If the plant is male, you will see the small balls starting to develop through the use of a magnifier. Clusters of small balls will confirm that you are growing marijuana males. If you do not want the release of pollen from the male marijuana plants, pull them out from the garden as soon as possible. Male plants will show off their characteristics earlier than the females. Males will have fewer leaves and branches are irregular. Instead of forming white hairs, the male plants produce small balls. After a week that male traits are evident, pollens are released. But before pollination happens, sort and remove the males carefully from the garden if you want potent buds. 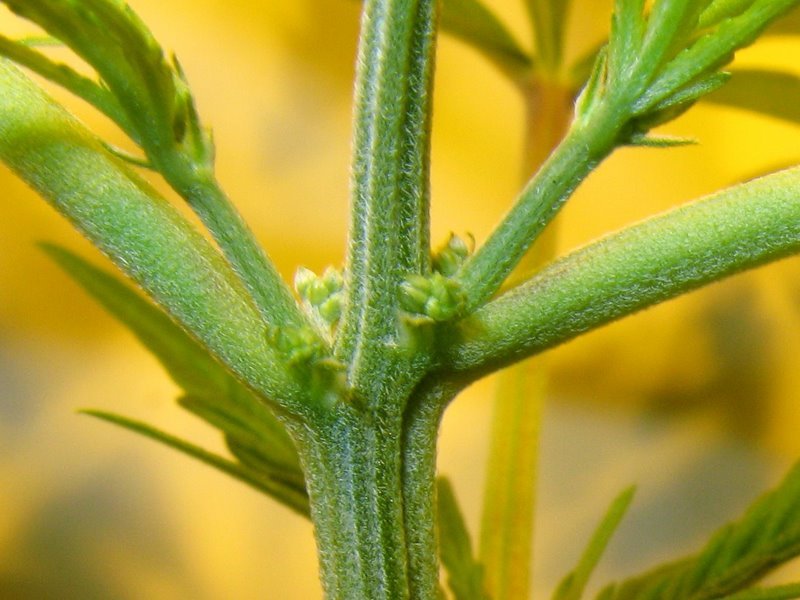 Early sexing of cannabis is necessary if you aim of growing pot producing buds with high potency. Male cannabis can lower the potency of the females once pollination begins. The potency is affected because the energy that should be for bud production is being used up in producing seeds. Thus, bud potency is reduced. When female marijuana plants are not pollinated, the buds became more potent and are referred to as sensimilla or without seeds.

When growing marijuana from a pack with regular seeds, the exact number of male and female marijuana plants is not determined during the early stage of growth. Wait until the pre-flowering time and plants will start to show off their characteristics. During this time, you can already distinguish which are the males and females.

How to Come Down from a High When You are Smoking Too Much Weed?

Is UV Light Important during the Flowering Phase of Marijuana Plants?

How to Take Care of Marijuana Seedlings

Choosing Pots and Containers for Marijuana Growing In Soil